The first time I saw The Help, I fell in love with Minny. She was a Truth Telling Nightmare, who fought back, regardless of the risks; and shined a light so bright, that the Doers of Darkness, had nowhere left to hide. And while tale after tale of bravery and heroism had me cheering the whole way through, nothing compared to Bad Ass Minny, taking a dump in a Narcissist’s pie. 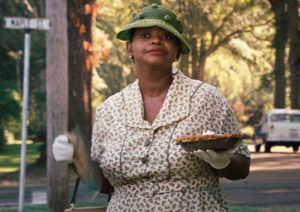 For anyone who hasn’t seen The Help, here’s a quick re-cap, so we’re all on the same page: It’s about black maids, in Jackson, Mississippi in the 1960’s, and a journalist who asks them to write a book about the abuse they experience while working in white households. While they all wanted the truth to be told, speaking out had consequences; and fear of retribution was holding them back from what they knew in their hearts was the right thing to do.

Let me just pause here to say that yes, I do understand this was a story about Civil Rights and Racism, not Narcissism. And no, I’m not going to hijack the entire thing so I can squeeze it through a Cheese Whiz can of my own life filter. And yes, this really is going somewhere. I promise.

One night, during a dangerous thunderstorm, Minny uses the “white” indoor bathroom, instead of risking her life to use the “colored” outside one. Hilly fires her on the spot, and then blacklists her from ever finding another job in Jackson, by accusing her of theft.

A few days later, Minny shows up with an offering of “peace”, she knows Hilly can’t resist: her famous chocolate pie.

“I guess no one wants to hire a sass mouth, thief” says Hilly, reaching for her second slice. “But what DO you put in here that makes it taste so good?”

“That good vanilla from Mexico” says Minny with smile. “And something else……reeeeal special”.

Right about then, Hilly’s mother reaches for a piece for herself. Minny grabs it away, explaining that it’s a “special pie, just for Miss Hilly”. Hilly glares at Minny like she’s a naughty dog, pushes the pie across the table, and orders her to cut a piece anyway.

And that’s when she does it. Minny looks her square in the eye and says, “Eat My Shit”.

“Have you lost your MIND?!?” seethes Hilly, with a hand on her chest, and eyes wide with surprise.

“No Ma’am”, says a smirking Minny, “But you’re about to……cause you just did.”

Then Hilly gags. The maids write their book. And the crowd in my mind cheers wildly.

And not just for the poopy revenge.

Ok, so kind of for the poopy revenge.

But mostly because Minny uses that story, she calls The Terrible Awful, along with Hilly’s massive ego (the Achilles heel of a Narcissist) to give everyone else the courage to admit the truth, and have the hard conversations that they were too afraid to have before—with themselves, and each other, and the world.

Life is full of hard conversations.

And we hate them.

Because just like the maids—even if it is for different reasons—we’re afraid too.

The difficult truth that I have to tell is about Narcissism and Psychological Abuse. As a child, my entire life was influenced by it, and later on as an adult, I was almost destroyed by it. But one day, I found a Facebook page about Narcissistic Abuse, and for the first time ever, my experience had a name besides “You’re broken”, “God doesn’t love you”, “You’re un-savable”, “If it wasn’t for us you’d be a druggie in a ditch”, “You’ve always been the problem”,  “You’re crazy” and “You’re bad and going to Hell”.

And look. No one wakes up one day and says “Ya, I know I could write about puppies. Or cupcakes. Or my favorite red nail polish. But no. I’ll pick this life altering, misery creating, destroy-you-from-the-inside-out social disease, with far too many S’s for someone with a slight lisp to pronounce.” But when that’s what has been put in front of you, there are choices to be made. One of those choices is hiding it away in the cobwebby attic of dysfunction and pretending it doesn’t exist. Another is saying “What the hell.”, and tossing it all in the middle of the lawn for anyone and everyone to see.

Sometimes I really doubt myself; and my motivations; and the wisdom of living out loud; without apology; on my own terms; and in my own words, instead of reading from the script that was written for me, and playing the role that was given to me, long before I ever had a choice.

More often than not, that doubt eventually leads me right where I am now: with one part of my brain running towards the toilet with a hand over it’s mouth screaming “Omg! It’s happening again!”.  Like vomit. But with words.  While the other part of my brain is sitting cross legged in a corner, with leopard print reading glasses propped on it’s head, making a solid list of pros and cons, that looks a little something like this:

Reasons, I shouldn’t write a series on Narcissism called ‘Tales From The Narc Side’:

Reasons I should write a series on Narcissism called “Tales From The Narc Side”:

1.) Because if I’m being honest, it’s one of the reason I started this thing in the first place.

2.) Because up until I was 40, my entire life felt like an effed-up combination of the shows Survivor (schemes, manipulations, broken alliances, and the inevitable blind side that always ends up with someone being voted off the island), and The Sons of Anarchy (mafia-like tribalism, minus the dead bodies; just an endless trail of broken souls, spirits and relationships). When we know better, we do better. But that can’t happen until we give ourselves permission to even admit it should be better in the first place.

3.) Because the people who don’t like me, already don’t like me. This isn’t going to make it worse. Once you’ve gone bankrupt, there’s nothing left to take. The life I once had, doesn’t exist anymore. And the one I’ve rebuilt, doesn’t drift and crumble like water over sand. Most of the time, it’s stable, and solid in a way that only comes from being broken—and learning that broken places can heal up stronger, than they ever were before.

4.) Because I wouldn’t even be here unless other people had been brave enough to tell their stories first. And by “here” I don’t mean sitting in this second hand chair, at an Ikea hack desk, with an empty chipped coffee cup, thinking panicked thoughts like “You’re not really going to post this are you? Please tell me you’re not going to post this…..”. I mean “here”, as in, on this planet.

6.) Because I didn’t fight this long, and this hard, to get where I am for silence. Silence made me sick. Living in the truth made me whole….ish. And no one gets here alone.

7.) Because the poet Rumi says that being human is like a guest house, with many different visitors. While some of those visitors are going to show up for tea and help you plant flowers, others are going to barge in with a keg of cheap beer and totally trash your place. When that eventually happens, there’s no such thing as having to much help picking red cups up off the lawn and skimming puke off the top of the swimming pool.

8.) Because I never want to be so “healed”, that I forget who I used to be, and the journey I’ve had to take to even get where I am. True healing never stops; and it’s the cracks, and the breaks, and the places that still hurt, that keep me reaching forward for help from the ones who have gone ahead of me, and reaching backwards to grab, the ones who are still behind me.

9.) Because I can’t keep waiting for “someday safer”—when this person gets dementia and forgets my name, or when that person graduates and doesn’t need my protection anymore. There is no such a day. And we need each other now.

10.) Because years ago, I heard a voice in a dream that said “Why are you living like a prisoner, when I’ve already set you free?”.  There is nothing more powerful that hearing the words,“Me too, I believe you, and I believe in you.” Being that voice for someone else, is part of living free.

11.) Because the first indication that something is wrong with the people in our lives is often anxiety, and depression, and addictions, that don’t seem like addictions—to drama, and chaos, and outbursts, and victimhood, and facades, and a nameless, faceless rage that shows up in all of the places, that it doesn’t have a right to be. Not a single one of us, deserves to live this way.

12.) Because life is only as good as our crappiest relationship—so knowing what a Narcissist is; the tactics they use to abuse people; the traits in our personality, that make us good Supply for their bottomless pit of Need; the unconscious ways we attract them; and the conscious ways to repel them, not only changes our lives, but the lives of those around us.

13.) Because giving a destructive disease a name, and sharing the tools I’ve found to overcome it, can all be done without ever detailing times, or places, or exposing a single person’s identity. It not about them anyway. Or revenge. It’s about the fact that everyone suffers in one way or another. It’s our common ground. And it only takes one person telling their truth, to open the door for someone else to tell theirs, and start a journey of their own.

14.) Because you don’t actually have to shit in someone’s pie, to make them cough and gag and act like you’ve just shit in their pie. To a Narcissistic Abuser, healthy boundaries, truth and reality are the shit in their pie. And once they see you’ve mastered those, they won’t be back for another slice.

One of the most powerful tools an abuser has, is the ability to make us feel guilty or afraid to tell the truth about what they’ve done. Or worse yet, they’ll try to convince us that the abuse we experienced first hand, never really happened; or in the off chance that it did happen, it really wasn’t that bad. Then they’ll try to shame us for being “overly-sensitive” or “over reactive”. They’ll tell us that we take “everything too seriously”, and that we  just need to “chill out”, or “get on some meds”, or “learn to take a joke”.

It’s just a way to keep people quiet, so they can keep on doing whatever they want, whenever they want, to gets their needs met. All on someone else’s dime.

It works, because it threatens our basic need for love and acceptance. And if it happens in a group, it plays on our primal fear of being an outcast in the tribe. It’s also the reason that an entire group will ignore what they know is right, and stand by and watch an innocent person suffer without intervening to help.

Doing this. For me. Is the opposite of that.

So here it is, I guess. The first installment, of what I hope is many, to a series I’ll call, Tales From the Narc Side.

Being afraid isn’t nothing. But it also isn’t everything. Our stories deserve to be told. Even if we do have to add “a little something…..reeeeeeeal special” to get the job done.

3 Replies to “It’s More Than Just the Poopy Revenge.”