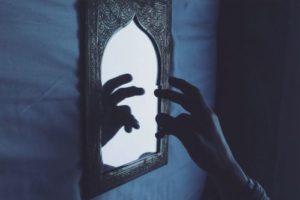 So here we are again.

Me: cursing and crying and digging a hole in the wall in front of my desk with an anxious big toe, as I Write. Erase. Repeat. And then press my fingers into my eyeballs as far as I can without causing permanent blindness, and think “Who even does this?”

Like really. What kind of person feels the burning need to vomit words into space where anyone.

For the last month. Every time I’ve tried to write this post, that’s the only thing that comes out.

And why do I need to do it? For the love of all things holy WHY, when it’s way easier, and far more enjoyable to eat my feelings the way normal people do.

Maybe I should have known these things, before spending an hour on the phone with The GoDaddy Saint, who toddler walked me through choosing packages, and in-depth explanations of technical terms, after I spent weeks and weeks of googling “WTF IS A WIDGET?!?” with teeth gritting angst, all on my own.

And I really was.

That’s what I’m here for, he assured me. Which was both a comfort, and a disappointment, because I was half hoping that the minute I called, the wise millennial owl on the other end of the line would say “No. Absolutely not. We do not sell blogs to people who have no actual proof that they have anything new or important to say. So piss off, okay?”

Then that would be it. I’d take their word for it, piss off, and I’d finally be free.

“What will your blog be about?” asked Saint Daddy.

“Narcissistic personalities.” I blurted out. “And abusive relationships. And toxic families. And cults. And faith destroyed. And faith restored; well, sort of.  And being adopted. And finding your birth family after your life is half over. And missing them so much, that even when they’re standing right there in front of you and you’re squeezing them tight, your heart still feels like it’s trying to pump cold molasses through one of those little green coffee straws. And how not to drive yourself off of a cliff when you finally hit 40, and realize that the stories you thought you had neatly stacked and hidden, weren’t really hidden a bit. And now they’re hanging out all over the place, like the identity crisis closet of a teenage girl, but instead of the real stories you wish you could tell, they look like anger, and sadness, and outbursts, and phobias, and depression, and all sorts of socially acceptable addictions that make you feel weirdly cozy, and absolutely miserable all at the same time. And it’s about hatred, and healing. And bitterness, and peace. And finally telling the truth, for the first time in my life. And you know…..maybe some cute animal stuff too…….”

Yeah. Good luck with that.

And now every day since, It’s been you and me, and some combination of Oreos, Fireball, and Trader Joes Turkey and Stuffing potato chips (strangely delicious btw ) in front of a dead white screen. And besides the fact that I can’t seem to sleep, or get rid of that sandpaper feeling that’s itching beneath my skin, I’ve pretty much convinced myself that I’ve just spent $119.99 to finally figure out that I’m not strong enough, or brave enough, to even do this kind of thing.

A little over 8 years ago now, my friend J.—and by friend, I mean therapist, but whatever—asked me what I wanted most in my life.

I told her that I just wanted to be a real person.

Not that I knew what that meant, because even as a married adult, with a real job and a real family and all sorts of other things that seemed really, really, real, I was also fully owned—body, mind, spirit and soul—by everyone, and everything, other than myself. And no matter how real I looked on the outside, I had no idea what it was supposed to feel like on the inside. What I did know, is that driving down the freeway and staring longingly into the eyes of an oncoming semi, and silently begging it to wipe me off the planet, probably wasn’t it. Neither was spending day after day, sobbing next to the dog dish on the laundry room floor, while my kids binged on Animal Planet, and picked trail mix from between the couch cushions instead of asking me for a snack, because Mommy was “sad and scary”.

And for whatever reason, writing it down, and sending it out, makes me feel as real as I ever have. Fear has a way of doing that, I guess.

So maybe that’s the reason why, I feel this constant need. Because I desperately crave the realness and the clarity, that only writing brings. And because until I started writing my own stories, on my own terms, life was the opposite of clear; it was a murky green soup with bits and chunks of the nasty unknown, and I was choking on every bite.

I fully believe, that either consciously or unconsciously, functionally or dysfunctionally, we’re always telling our story. Knowing and accepting the real story, is what keeps the rest of our lives, from being nothing more than a metaphor, for the things we’re too afraid to say. And reconciling the truth, means stepping into the life we were made for, instead of wasting everything we’ve been given, on surviving the one that we weren’t.

Healed people, heal people. But unless we tell out stories, that’s kind of hard to do. Not that I’d call myself healed. I’m too stumbling and bumbling and reaching and slobbering to ever live up to that. But I have done some heal-ing; so I guess what I’m trying to say, is that I’m showing up, and I’m ready to share—run on sentences, iffy punctuation, crap grammar, and all.

Even if it’s just with you, WordPress.

So just as a little side note: I hope it’s ok, that I’ve started to envision you as a strangely attractive, slobbish older man. Not too hot, or I’d start picking my nails, and laughing like a goob. And not too interested in what I have to say, or I’d think that all of this matters way more than it does, and end up right back where I have been; miserably frozen in that hellish combination of Imposter Syndrome and Fear-of-Pretty-Much-Everything (besides eating chocolate covered nuts, on a broken-ass recliner, and binge watching Netflix, while I pretend not to notice that the dog is scrubbing his butt on the carpet again). I’m picturing you like The Dude. Maybe a little more sober, but definitely in your underwear, and listening just enough, through half closed eyes, to say something kind of encouraging, and kind of rude, like, “Get over yourself girl, and just do it already.  It’s almost time for my second morning nap.”

And will you look at that, WordPress? I think maybe, I just did.

10 Replies to “Dear WordPress. You’re the only one who truly understands me.”